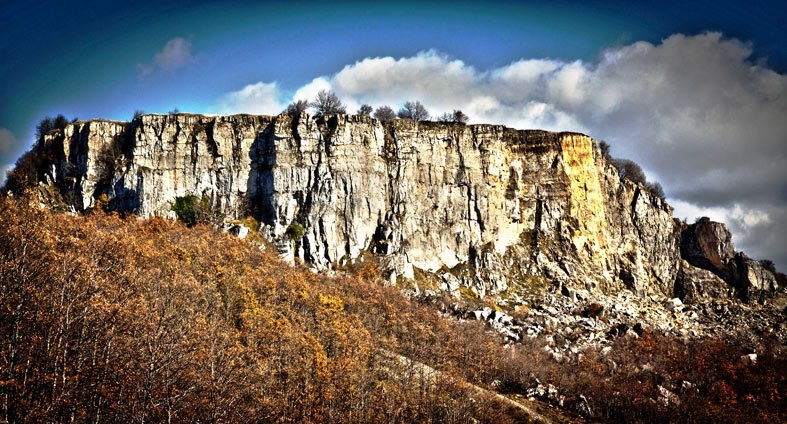 What you will see:
Casa Barboni, Camprene, Sasso di Simone, The city of the sun (ruins).

The Path
The start is downhill along the ancient paved road leading to the old mill and iron foundry, of which you can see the ruins, following for a stretch the Foenna creek.

You will pass under the castle of Modanella then go on the side of Rigomagno through a track that runs along coppice woods, rich in wildlife, to rejoin on the road to the castle Calcione to our starting point.

Details of what we see on the path

The Sasso di Simone and Simoncello
An enormous limestone raft, floating above a thick clayey pall”, this is how the Sasso di Simone appears from far off. Here you can penetrate an almost entirely unspoilt environment, and discover fascinating landscape views, surprising geological formations and the distant historic events that concerned the area. At over 1200 metres high, the summit plateau of the Sasso di Simone represents an exceptional balcony from which, on clear days, you can admire the blue line of the Adriatic coast.

In this spot, now a Nature Reserve, where our journey ends, the visitor is sure to be entranced by the spectacle of the massive rocky pile of the Sasso, set as a sentinel over a unique landscape. Nature expresses all its beauty in the surrounding woods of turkey oaks, in the immense meadows, coloured with numerous blooms in springtime, in the erosive landforms of multicoloured earth that offer glimpses of a spectacular lunar “ravine”.

What will surprise you is the sensation of being in a place that seems so remote, different and secret, which is yet easily accessible even for non-expert walkers in search of a hidden corner of paradise. The limestone rock of the “Sasso” bears the signs of its origins in a seabed many millions of years ago in an area hundreds of kilometres further westwards: the shells embedded in the rocks give the impression of a reef of time gone by. On the paved road and at the summit, walking through the ruins overgrown with trees and shrubs, you can still read another story, considerably more recent, of the ambitious project of Cosimo I dei Medici to build here what was called the “Città del Sole”. Outcrops of blocks of stone allow us to imagine the arrangement of the houses and the barracks, while grassy paths map out the probable layout of the streets. It was undoubtedly a site of pagan rites from the most ancient times, a natural sacred altar to the Sylvan and mountain deities. In the Middle Ages it was a site of transit for merchants, and a resting-place for the pilgrims who from the Adriatic valleys followed the route of the Apennine chain on their way to Rome.