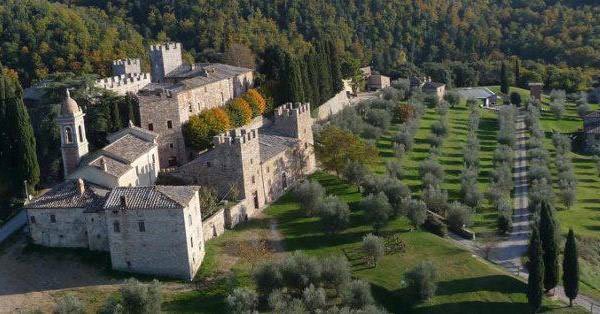 The path
The departure point is down hill along the old paved road which led to the old mill and to the iron foundry whose ruins are met along the way, following for part of the path the torrent Foenna.
We then pass below Modanella Castle and then proceede on the side of Rigomagno.

Truffle Hunting
You’ll enjoy some hours walking through Tuscan country and wild woods, picking truffles along with Mauro an authorized Tuscan GAE (trekking guide of Tuscany), who will teach how to find truffles with his dogs Nedo and Brezza.

For those who love the Tuscan wines, following the truffle hunting, we will move to have a wine tasting of 7 different type of wines in the tasting room of the Santa Vittoria winery or a food tasting combined with the wines and truffle!

Torrent Foenna
This is an important water flow since the antient times, the torrent is born in an area called Palazzolo on San Giustino hill (knoll)and flows for 37 km through the provinces of Arezzo and Siena. In 1970, in an area called Calcione, the torrent has been harnessed to create a reservoir called Diga (damm) del Calcione. The basin mesures 5 km in length and 500 mt in width; with a harness volume of 3.96*106 cm, surrounded by thick forest, the damm has become a recreational area for picnics and a paradise for birdwatching, carpfishing and spinning lovers.

The bed of the torrent is deep down in the woods but in several points it becomes wide and areated and during the dry summer season it becomes walkable for long parts. Its name Foenna indicates that back in the past that specific water flow was considered important and along its trail it brough energy and abbundance. The term Foenna can be connected to the latin noun Foenum/Fenum and its declination Foena may mean “beared of abbundance”, of fienii (hay, crops).

Modanella Castle
The oldest parts of the Castello di Modanella were built in the 12th century by the noble Cacciaconti family. In a later period, the Piccolomini family of counts inhabited the castle for hundreds of years. Despite the alterations and extensions that have occurred in the course of its history, Modanella has retained the appearance of a real fortress. As you go through to the courtyard, with its view of the charming loggia and the “Italian” garden, the view is spectacular.

The Modanella estate extends over no fewer than 645 hectares in the province of Siena. The castle dominates its surroundings, looking out over several farm houses.