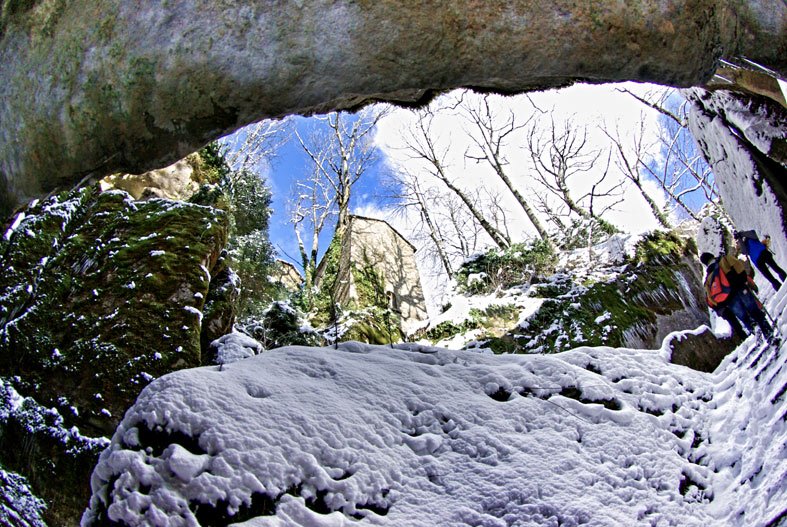 From La beccia to Laverna
The drive up the mountain is glorious. La Verna is full of history. The monks seem an impressive, humble group. The monastery is close to the summit, surrounded by trees, with deep silence and magnificent views. If there is only one trip you make while in the area, this should be it. Wonderfully inspiring.

The Path
From la Beccia to Laverna trough the Fairies Forest.

Saint Francis and the Sanctuary of La Verna
According to Christian legend, a local count, Orlando of Chiusi, was so impressed with St Francis that he gave him the mountain of La Verna as a place of contemplation, prayer and solitude in 1224. During his stay at La Verna, St. Francis asked God to allow him to participate with all his being in the Passion of Christ. After this, a crucified seraph appeared to him and he received stigmata. Count Orlando of Chiusi gave La Verna to Francis on May 8, 1213 as a retreat specially favourable for contemplation, and in 1218 built him the chapel Santa Maria degli Angeli. In August, 1224, frustrated by the changes in the Order of Friars Minor, Francis withdrew to La Verna to keep a forty days fast in preparation for Michaelmas and while praying on the mountain-side he received (on or about 14 September) the stigmata. After seeing a vision of a seraphim he began to develop nails of hardened flesh which protruded from his hands and feet. He also began to form a wound in his side like that of Christ. Thus La Verna came to be seen as sacred ground. Pope Alexander IV took it under his protection. In 1260 a church was consecrated there in presence of St. Bonaventure and several bishops. A few years later the Chapel of the Stigmata was erected, paid for by Count Simone of Battifole, near the spot where the miracle took place. The Chiesa Maggiore was begun in 1348, although not finished until 1459.